It looks like the inevitable news is on its way…. 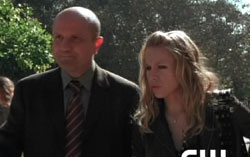 The usually-reliable Kristin Veitch at E! Online has revealed that Season Three may be the last for Veronica Mars.

“I’ve never been less certain of our fate. I’m afraid I’ve gone from cautiously optimistic to something less than that,” VM creator Rob Thomas told Kristin.

Ratings for this season of Veronica, after a very good start, had fallen in the early 2007 episodes. The fact that a cheaper reality show such as The Search For The Next Pussycat Doll got better ratings could not have helped. The CW’s insistence on removing Veronica from the repeat cycle, so people may forget it’s still even on the air, can’t help much either.

Stay tuned for more information as it becomes available. If Veronica is indeed cancelled, here’s hoping The CW at least allows them a good send-off.

UPDATE: Moviehole.net has confirmed with a source close to one of the cast members that the show is indeed ending. Stay tuned!

UPDATE #2: Kristen has posted a new post saying that Rob Thomas has written her again, assuring her that the show has NOT officially been cancelled, but also that the show MIGHT still have a chance with yet another new format. The Hollywood Reporter has the details:

“Veronica Mars might be looking at a quick graduation from Hearst College. The fate of the CW’s cult favorite remains uncertain, but if the show returns for a fourth season in the fall, it might find the young sleuth in a different setting. “Veronica Mars” creator Rob Thomas has come up with an idea to fast-forward a couple of years and have Mars studying at the FBI Academy. (As a freshman at Hearst College, Mars (Kristen Bell) has been taking criminology classes and been looking to do an internship at the FBI.) Thomas is filming a trailer for the alternative fourth season of the Warner Bros. TV/Silver Pictures show, which will be submitted to the CW. The network’s executives ultimately will decide whether to pick up the series for another season and, if they do, whether to stick to the drama’s current plot line or go with the new version. If Mars goes to the FBI Academy next season, it will be a third backdrop for the character, who began her P.I. adventures while in high school.”